It’s been a long time coming.

First off, let me apologize for going so long without an update. That goes for the blog as well as the app itself. It’s been a rough year for all of us, but that’s not really a good excuse.

The short version of what happened this past year is that almost immediately after my last alpha release (which was almost a full year ago), the COVID-19 lockdowns started in the US. In addition to increased load at my day job, I also got involved in a COVID-19 Contact Tracing project as the engineering lead. That occupied most of my free time in the summer, then in the fall my wife caught COVID-19 and my whole family went into quarantine. At that point, we opted to keep our kids home for the rest of the calendar year in an effort to avoid spreading or catching the virus. Especially for the first several weeks, that meant I was in charge of home schooling all four of my kids while my wife was isolated and recovering.

This alpha release has a couple of things that multiple users emailed me asking for, as well as some small other features and bugfixes. I haven’t been chasing the causes of crash reports I’ve been getting, but I’ll be looking more at crashes and bugs in the next few releases.

I started getting back into working on File Buddy regularly about a month ago. I was still working on it here and there all of last year, but I was trying to build a search system that was as efficient and performant as possible, regardless of the kind of disk volume being searched. The search function I had built up to that point relied on a system call that doesn’t work for thumb drives or external hard drives. Eventually, I realized that I was trying to write a full file system library in Swift to abstract the low level C apis because the built in capabilities weren’t able to do what I want. Once I realized that, I decided to abandon that effort for the time being (I’ll probably return to it later) and just get it working. The result is that I’m no longer using the more performant search option that only works with macOS-formatted volumes. Instead, I’m doing something a bit simpler and more naive, but more consistently functional. I decided that a fully functional search was more important than the most performant search. I’ll come back to the performance stuff later.

A small change from File Buddy 10 that I feel I should mention. There are 2 ways to hide files in macOS: an explicit “hidden” metadata field and having the name start with a .. This later option comes from the Unix world, and Finder supports it. File Buddy 10 does not treat the prefixed files as hidden, most likely because my dad wasn’t familiar with the pattern since I don’t think macOS pre-OSX supported it. I decided that I wanted to be consistent with macOS rather than the previous releases, so now searches will treat files whose names start with . as hidden. Along with that, files in folders that start with the . are also considered hidden, following the logic that if it wouldn’t show up in Finder under normal cricumstances, it should be considered “invisible”. 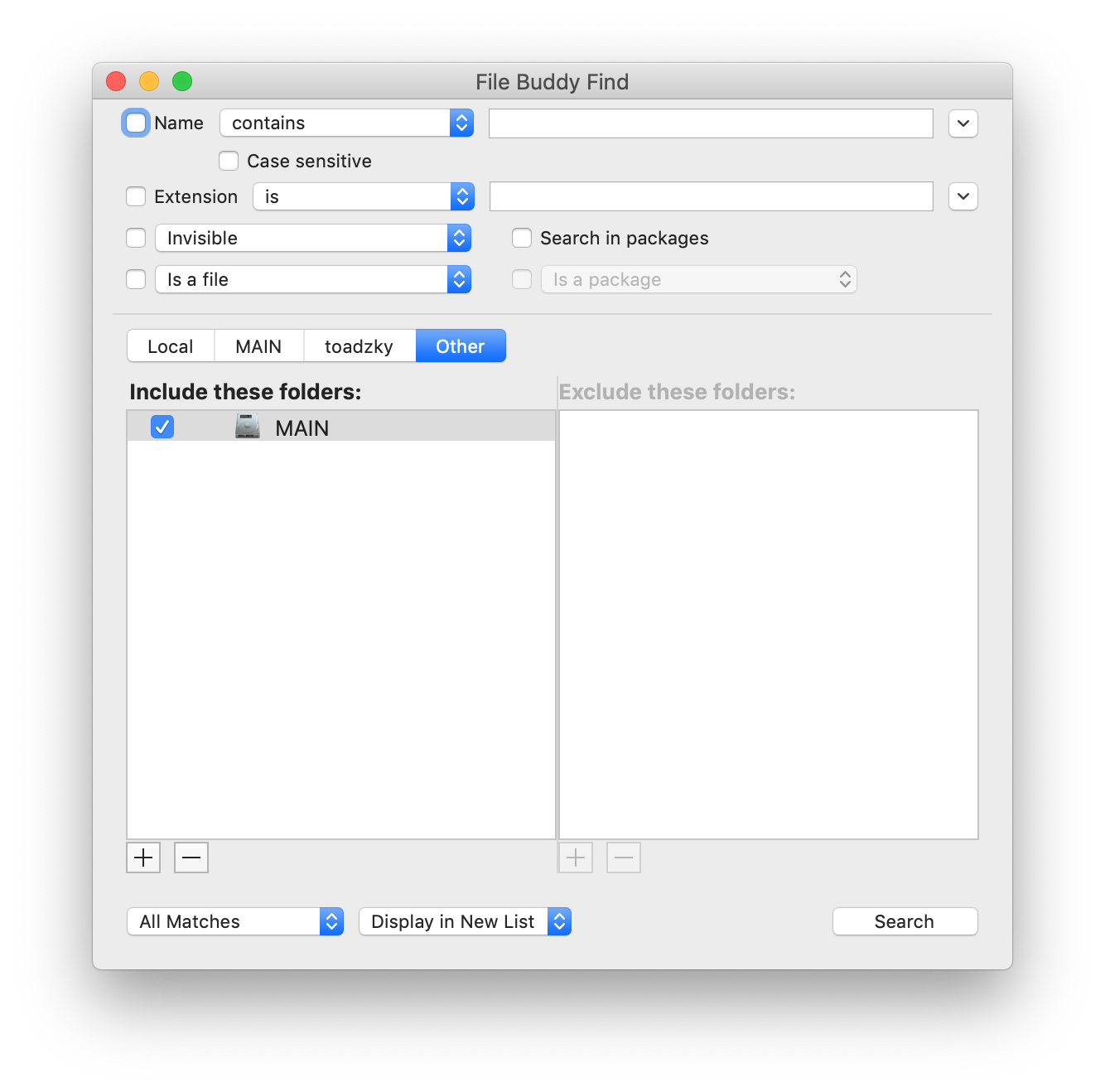 Future versions will add the dropdown to the + button for quick access to things like folders in your Home directory and allow excluding specific folders.

This is similar to the history menu already available on the Name criteria, but for extension searches.

This is probably something that not many people care about, but to me is a big deal. This is a feature that I have returned to over and over again and couldn’t quite make it work for the last several years. It’s never been a big enough feature that it blocked releasing other things, but it was always a thorn in my side. It’s finally done and the tokens for label/tags are now colorized with their assigned colors. 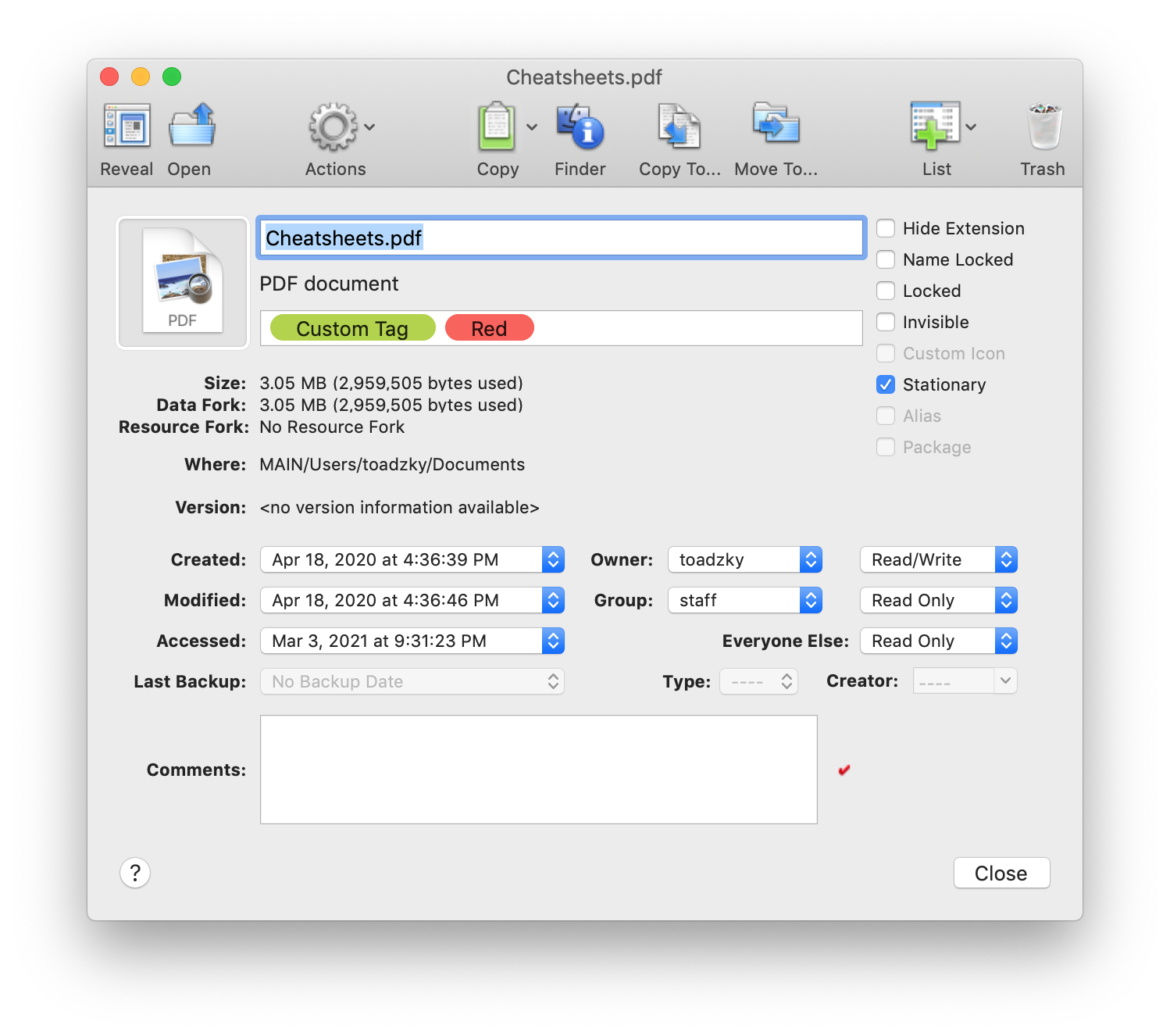 More work on the Other search option and crash reports for the near future. Longer term, things like the Cleaning menu are on my list of things coming up. Related to the colored file tags I added in this release, I would also like to allow creating custom tags through File Buddy, rather than just being able to use what is already defined.